Todd Halterman wrote an article based on an interview of myself, Chris Norman titled "The Man Who Killed 3D Printing". While most of the article is factual, including the fact that I did truly have the idea of the business model for this venture in 2004, what is most important to me is the fact that Digital Factory is finally being made available to everyone. That was always my intention, to provide a platform to everyone.

In 2004 I started working on a way to create class rings with customization using 3D printing but everything was so difficult to do, including how terrible in-browser 3D worked with applications like Viewpoint Media Player, Active X and so forth. Within 6 months of trying to do it... began to realize that everyone would want a platform like this. So, by mid 2005 The company name Digital Reality emerged because that was exactly what we would be creating...a system to virtually move around CAD models for production in a new kind of system. That's about the time we also came up with the name Digital Factory from Digital Reality and named the process "Made-To-Order Digital Manufacturing Enterprise". In fact, I used the box below to pitch the venture as early as 2006. 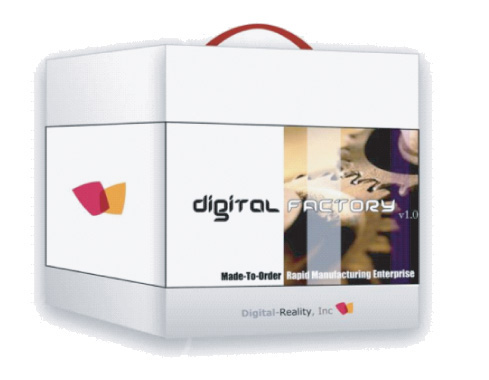 It made sense to me then and still makes sense to me now that a single company should create a platform for everyone to use and open it up for a very affordable rate so that anyone can create a platform-as-a-service to offer 3D printing-based e-commerce. It's too difficult to rely on individual companies making it difficult to deploy like certain companies we won't mention. Not everybody knows Javascript or anything else technical about 3D printing for that matter. That's why I still believe that providing services turnkey is the right business model to enable everyone with an idea built around 3D printing makes sense.

I certainly hope you agree and will help me make 3D printing - as an industry accelerate growth and create many lucrative small businesses around it in the coming years.